Scrabble vs. Lexulous: What's the Difference?

Scrabble is known to many; if you haven't heard of it, you might be living under a rock! It's the board-and-tile game that took the world of words by storm since its inception in the '50s.

Meanwhile, on the word-game scene for over ten years and bearing a striking resemblance to Scrabble, Lexulous has been garnering many players with their version of the game.

This article will explore the differences between each game, some of our opinions on the changes that the Agarwalla brothers made when they developed Lexulous, as well as some history between the two.

The Classic Game of Scrabble

First sold in 1954 after being painstakingly developed by architect Alfred Butts, Scrabble is considered the classic crossword game for between two and four players.

Players score by using letter tiles, which each have point values, to create words. Scores can be increased by placing these letters on premium squares scattered throughout the board.

Since its creation, Scrabble has had multiple variations, been created into a national daytime TV show, and has gained the adoration of millions of word-lovers across the globe.

As the years went by and Facebook games started gaining popularity, the Agarwalla brothers, Rajat and Jayant, developed what would become a hugely popular title across the internet: Scrabulous!

Scrabulous was essentially a carbon copy of Scrabble available on Facebook, drawing in over 600,000 players every day at its peak.

Of course, when Hasbro, the current owner of Scrabble and its various intellectual properties, realized that Scrabulous was doing so well, they stepped in with multiple lawsuits about IP and copyright infringements.

The brothers had to pull the game from Facebook. However, courts in Delhi decided that if some of the core principles of the game, such as the number of letter tiles, point values, and premium squares were changed, it would merit enough difference between the two titles.

And so, in 2009, Lexulous made its debut on Facebook, with some key differences between it and the classic Scrabble product.

Lexulous is now available completely free-to-play on the web and has some free and paid options on Android and iOS.

Differences between the two games

Let's look at some of the differences the brothers were forced to create between the two games:

Differences With the Board

The main difference with the board is the number of premium square tiles available on the board and their locations.

The Scrabble board houses:

Whereas the Lexulous board features:

The layout of the squares is also different. Take a look at the Scrabble board (below):

And then the Lexulous board (below): 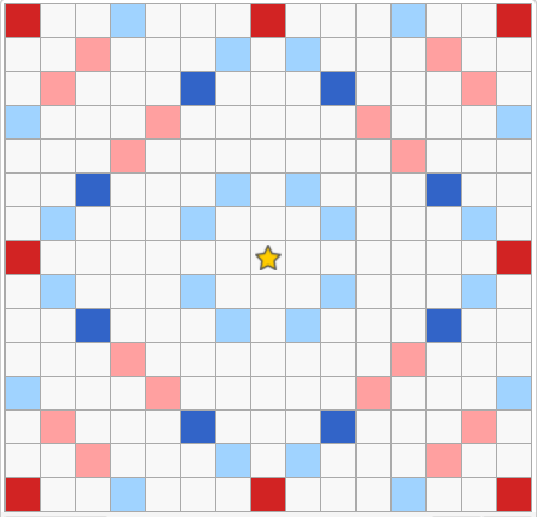 You might notice that it's more difficult for the Lexulous player to hit a premium square at the beginning of the game with that layout. The changes in the version of the board are sure to alter the strategies of some players.

About the letter tiles

One of the main things you will need to wrap your head around if you are going from one game to the other is the differences in the letter tiles.

Lastly, the point values for some of the letters in the two games are different. We created a handy table to show you the point values of each tile as well as how many times they appear in the bag:

Which Should You Play?

There are some significant differences between the two titles, and players will have to make their own decision of which one suits them more.

It is said that Butts spent a long time experimenting with factors such as premium square placement and the number of tiles in your rack to provide the best overall experience for the average player.

However, some players may enjoy the additional challenge that having an extra tile can add, opening up new possibilities for players and raising the game's skill ceiling.

As the web version of Lexulous is entirely free-to-play, you might as well jump in and have a couple of games against computer opponents or friends, especially if you are a fan of the original game.

With that said, die-hard fans of the original title may find it difficult to sway, and the vast majority of players, guides, and tournaments are still in favor of the original.

Tips for the Classic Scrabble Player

Learn to use the eighth tile. It can be difficult, especially if you are used to using a classic seven tile setup, but in more cases than not, having an extra tile can make things easier. Remember, to get a 40-point bonus you only need seven letters. In addition, you can start thinking of common eight-letter words when you are practicing.

Study the new grid. The grid often dictates how we play the game, and it's vastly different on Lexulous. There are fewer premium squares overall, so taking advantage of them is even more important.

Overall, Lexulous really isn't that different from Scrabble, and players who have a good command of the original game shouldn't have too much trouble with this version after some practice!