Scrabble Vs. Words With Friends: How Are They Different? 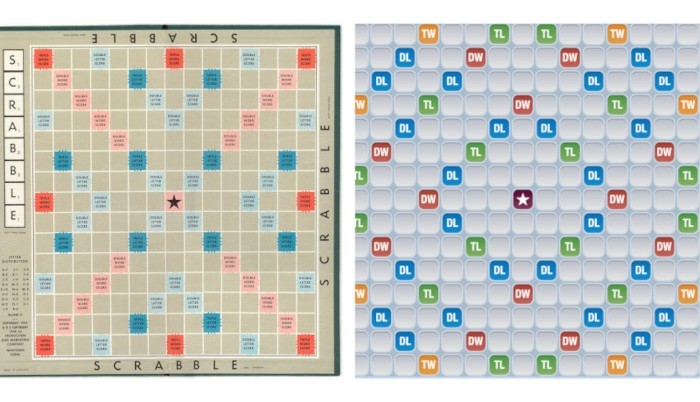 At first glance, Scrabble and Words With Friends appear identical. Once you’ve played both, you’ll realize that they’re very different. From the board layout to the rules, these games have two distinct playing experiences.

What are the major differences between the two and how should you choose which one to play? It depends on your level of experience with word games and the type of challenge that you’re looking for. There are passionate fans of both games for a variety of reasons.

Scrabble was invented as a board game in 1933 by an architect who was out of work during the Great Depression. The game was rejected time and time again, and therefore wasn’t trademarked until 1948.

An important difference between the two games is a change in the point value for each letter tile. For example, you’ll collect 2 additional points with a J in Words with Friends, and a single extra point for both B and C. On the other hand, you’ll earn one less point with a Y or an H tile in Words with Friends than you would playing Scrabble.

For the most part, tiles have a higher value in Words With Friends, including B, C, G, J, L, M, N, P, U, and V. If you’re used to playing scrabble, you will have to adjust to seeing higher scoring words and different types of words played to earn more points. When you switch to Words With Friends you will need time to learn strategies around a different tile scoring system.

Bonus scoring is also slightly different between these two games. In both games, you can score extra points on a “bingo”, which means using all 7 letters on your tile rack at once to form a word. In Scrabble, you will get 50 points from a bingo, but in Words With Friends you only score 35 points.

Amount of Letters Per Game

Another difference that changes the dynamic of the game is that there are different amounts of each letter in the game. There is one more S and one more T in a round of Words With Friends, which allows more high scoring words by making them plural or past tense. There is also one more D, E, S, and T. The H boasts two more tiles in WWF, which is double the amount that’s in Scrabble.

On the contrary, Scrabble has an extra I and N than Words With Friends. The difference between the amount of letters has a big impact on the letters that show up more on your tile rack. To be an expert at either Scrabble or Words With Friends, you’ll need to become accustomed to making words with some letters more than others depending on the game.

Arguably the most important difference between the two games is the board layout. The two boards have totally different amounts and placements of bonus squares, which requires different strategies when it comes to word length and placement.

Also, in Scrabble the center square counts as a double word, which automatically gives the first player, or challenger, an edge. In Words With Friends, the center square is just a regular square so both players start on equal footing.

Scrabble has 12 triple letter squares while Words With Friends has 16. However, Scrabble has 17 double word squares while Words With Friends has only 12. This leads players of WWF to focus more on using a single letter with a high point value, and players of Scrabble to focus more on word length. When it comes to double-letter and triple-word bonus squares, they’re the same for each game, with 24 double-letter squares and 8 triple-word squares on each board.

Scrabble or Words With Friends? Why Not Both!

While it may not appear so on the surface, Scrabble and Words With Friends are two very different games. If you’re having trouble deciding which one to play, give them both a try. It all comes down to personal preference and the kind of game you’d like to play.